What Is A Maori Face Tattoo? 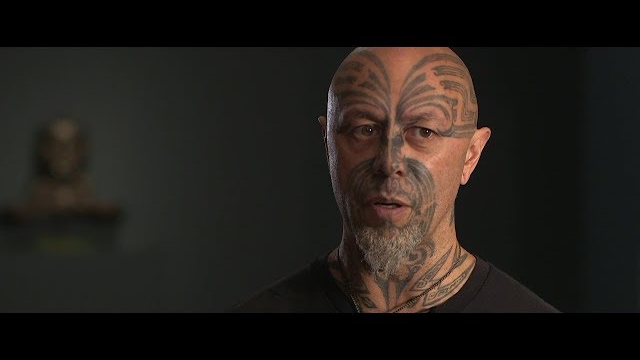 For New Zealand Māori women, the moko kauae, or traditional female chin tattoo, is considered a physical manifestation of their true identity. It is believed every Māori woman wears a moko on the inside, close to their heart; when they are ready, the tattoo artist simply brings it out to the surface.

Last month, Nanaia Mahuta became the first member of parliament in the world to wear a moko kauae. The 46-year-old made history not only because of her decision to wear her Māori identity on her face in a political arena, but as part of the resurgence in Māori women receiving the traditional ink.

It’s been an interesting thing. People look at you differently. “There were a number of milestones in my life, and it felt right to mark them in a way that is a positive statement about my identity,” Nanaia (below) tells Broadly. “Who I am, where I come from, and the contribution I want to continue to make.

When I got it done, I felt incredibly calm. I felt like it had always been there. ” Nanaia’s moko marked the anniversary of her father’s death, and the designs incorporate the traditional carving patterns of her tribe, Ngāti Maniapoto.

But she also received the moko to inspire her three-year-old daughter. “As a young Māori woman I want my daughter to know that everything is at her fingertips; she just needs to reach forward and grab it. ” Nanaia Mahuta. Photo by Kina Sai Nanaia’s first time in parliament wearing the moko was emotional. “There was a huge amount of pride from other Māori women,” she recalls. “It’s been an interesting thing. People look at you differently. It’s a cultural marker, and it says clearly when I’m sitting round a table that I do represent a certain way of thinking.

” Māori facial and body tattooing is known as Tā moko. An ancient art form, its origin lies in West Polynesia. The intricate designs were chiseled into the skin using a tool called an uhi; ink was then smudged into the carved lines.

Tā moko represents the wearer’s family heritage and social status—it is believed that the receiver visits a spiritual realm where they encounter their ancestors, returning as a new person. For Māori women, as historian Michael King notes in his seminal book Moko , the moko was a rite of passage, marking the passage between girl and adulthood. Maori woman c. 1890. Photo courtesy of Sir George Grey Special Collections, Auckland Libraries But from 1840, with the influx of English settlers , Māori were pushed from their lands and assimilation began. Colonial laws were passed banning what are known as tohunga , or Māori experts, and children were caned for speaking Māori at school.

By the 1970s, the moko had all but died out. Only a few female elders carried it, and elsewhere facial tattoos had negative connotations; adopted by disaffected urban Māori, they became associated with gangs and crime.

Things started to change in the 1980s, with a push to revive Māori language and culture, and in recent years there has been a revival in the ancient practice among both elders and young Māori women. Tā moko artist Pip Hartley, 33, is one of a new generation of Māori who are carrying the art form forward.

When she was 18 she started traveling to remote regions of the country to learn the ancient art, before opening her Auckland tattoo studio, Karanga Ink , this year. The moko process is intensely personal, Pip tells Broadly.

“I prefer to draw straight onto the person, because it’s an exchange of wairua, or energy. It’s working with the contours of their body and translating their story, and for a lot of people it’s a transformative experience. Every time they see it, it’s a reminder of what they’ve achieved, and that their tupuna [ancestors] have their back.

There are people who might look at it with one eyebrow up, not understanding it, but I think that is something these wahine [women] are ready for—to feel confident within themselves. I can’t wait to get mine. ” For weaver Jude Hoani, receiving her moko last year was about defining who she is.

” I’d been thinking about it for the past 20 years. Jude (below) first broached the subject with her late husband. “He said, ‘I don’t want you to have it done. ‘ I said ‘Well, it’s not your business, and you’re not part of the decision-making process at all, and you need to understand that.

Around that time, Gordon just sort of reappeared in my life, and I said, ‘Well, I’m ready to get on your table. ‘ ” Jude Hoani. Photograph by Stephen Langdon Jude says the actual tattooing, which took half an hour using a regular tattoo gun, wasn’t painful. “It was more uncomfortable. A quarter of orange in the mouth to bite on, and we were done. ” The design on her chin is a stylised ruru, or owl.

“A lot of people in my town who had never spoken to me started talking to me. They actually see me, they look at me, they look at my face, they look into my eyes. ” Now that I have this moko, I’m not invisible. “I was speaking to a Pākehā [white New Zealander] friend of mine the other day who is in her seventies,” Jude adds.

“She was telling me she likes going into the city less and less because when she stands at a counter she gets ignored. She said: ‘I’m sure it’s because of my age. ‘ Now that I have this moko, that doesn’t happen to me.

I’m not invisible. ” For More Stories Like This, Sign Up for Our Newsletter Forty-eight year old Benita Tahuri (below) spent more than half her life thinking about getting her moko, a time that was about average for the women Broadly spoke to. “I always knew inside I wanted one, and after going through a lot of life changes and challenges and much contemplation, I knew it was the right thing for me to do,” she says. ” Benita Tahuri. Photo by Stephen Langdon “There’s a lot of thinking that not anyone can wear one, that you’ve got to earn it,” Benita explains. “But my belief is that if you’re Māori, this is your birthright. No-one can stop you if you think it’s right for you. It’s something that was normal, and became not normal.

“For me it spoke of healing, reflection, and empowerment and identity. It wasn’t any conscious kind of thought—the physical manifestation of moko kauae is the end of a journey. We’ve had to struggle to get back so many things, so we shouldn’t put up barriers.

” Benita is of the Ngāti Kahungunu and Tūhoe tribes. She grew up in the small town of Wairoa, in New Zealand’s North Island. The local pub had an unspoken rule: the back bar was for Māori, and the front bar for Pākehā [whites]. No-one spoke Māori in public.

She moved to the city and sent her children to Māori immersion schools, and now her daughters Honey (23) and Anahera (25) have their own moko. Read more: The Enduring Friendship of Black Twin Sisters, in Photos “I wanted [the moko] to be part of what was normal for them,” their mother explains.

“For me it was more of a process, but for them it was just what they did. And that’s when it’s special. You know, you can’t just put it away, like if you have a tattoo you wear a shirt and it’s covered. It’s there for life. It’s a commitment to yourself and your identity. ‘ ” Benita with her daughters Honey and Anahera. Photo by Stephen Langdon As the needle pierced Drina Paratene’s skin, she felt nothing but peace. “I had been mentally preparing myself,” says the 52-year-old (pictured below). “We said karakia [prayers] before we started. I was expecting quite a high level of pain, and I had none at all.

“It’s saying ‘I stand in who I am, and this is who I am. ” Lying on the floor at home, Drina received her moko from artist Pip Hartley. Pip used the traditional tool, the uhi, which in pre-colonial times was a chisel made of bone, dipped into pigment and then used to cut the skin.

Pip uses a needle in her uhi, hand-tapping the ink into the skin in the traditional technique. Watch now: Australian Rapper Tkay Maidza is Ready to Take Over the World “I wanted her to use [the uhi] because it connects us to our ancestors and their experiences,” says Drina, a Māori language teacher.

“I thought ‘Okay, it’s probably going to get worse than this,’ but I lay there for six hours and there was no pain at all. ” Drina was part of the Kōhanga Reo political movement , which pushed to revive Māori language in the early 80s.

“I wanted to be part of the collective group of women who are wearing moko kauae to revitalise this tikanga [custom], so we could normalise it in our society,” she says. Drina’s moko symbolises the three values she believes are essential to a meaningful life: The first is tika, or honesty and integrity; the second is pono, or belief in a higher spiritual order; and the third is aroha, meaning love. ” Drina Paratene. Photo by Stephen Langdon.

What kind of tattoos do Maori get?

The main focus – The focal point of Maori tattooing was generally the face. Men had full facial tattoos, while women only had their chin, lips and nostrils tattooed. Some Maori also had other parts of the body tattooed, such as their back, buttocks and legs. Women were more often known to tattoo their arms, neck and thighs.

What do the lines on a Māori tattoo mean?

Tā moko reflects an individual’s whakapapa (ancestry) and personal history. In earlier times, it was an important signifier of social rank, knowledge, skill and eligibility to marry. Many of the designs are universal. In particular, the spirals that swirl across the nose, cheek and lower jaw.

The lines of a moko accentuate the lines of the face to emphasise the expressions. The main lines in a Māori tattoo are called manawa (heart). These lines represent your life journey. Common tattoo designs can include the koru, which represents an unfurling silver fern, and symbolically represents a new life or the unfolding of someone’s life path.

When used in tā moko, the koru normally represents a loved one or family member..

What does a moko Māori tattoo mean?

Moko Māori tattooing designsMāori | Noun may also indicate social status, role, and expressions of identity though genealogy, but this remains unclear. , 1906, by Leslie Hinge. Te Papa (B. 000832) Tāmoko has undergone significant changes since its practice was disrupted through colonisation and the adoption of Christianity in the mid-19th century.

What is a Māori comb tattoo?

Origins and traditional method of tāmoko – The Western and Eastern Pacific method of tattooing is based on the use of broad toothed combs of varying widths called uhi, dipped in dark pigment, and struck into the skin with small mallets known as tā. The teeth of the comb pierce the skin and deposit the pigment.

Māori brought this method of tattooing with them from Eastern Polynesia. As the art and practice of tāmoko   tāmoko apply traditional tattoo  (also known as tā moko) developed in isolation in Aotearoa New Zealand, Māori pioneered the use of smaller, narrower uhi without teeth that cut grooves through the skin.

This process was followed by the application of small, toothed uhi combs that applied the pigment. This method of tāmoko applied to the face is a form of scarification, which in practice is very similar to wood carving, and is characterised by deep grooved furrows stained with dark pigment.

Why My Tattoo Itchy?

How To Get Your First Tattoo?