How To Make A Tattoo Gun In Prison? 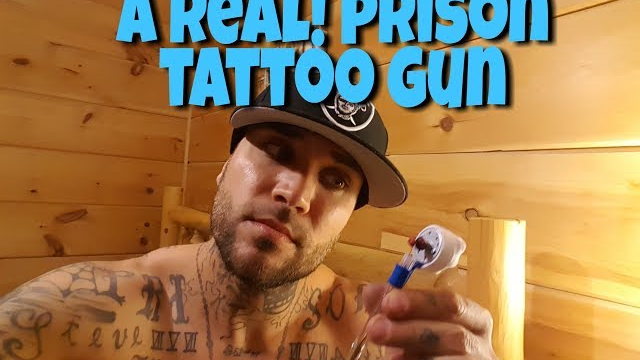 How do you make ink in prison?

Feature | Filed 06:00 a. 06. 07. 2019 D an Grote spent the last week of his seven-year prison term getting tattooed. Grote, 42, a prison teacher, had promised his students that if they passed their high school equivalency exams, he’d get a tattoo of their choice on his arms.

Almost all his students passed, and by the end of the week Grote’s arms were a melange of tattoo art that included prison towers and William Blake poems. Some of the students inked Grote themselves, using tattoo machines fashioned out of CD players, pen casings and guitar strings.

Other students just drew the art. “It was our way of saying thank you to each other,” said Grote, who left the Canaan federal prison in Pennsylvania two months ago after serving his sentence for a robbery. From notorious tattoos, such as a filled-in teardrop that connotes a murderer, to the more heartfelt, including girlfriends’ names or wedding bands, prison tattoos are badges of inmates’ identities.

“Some people want to look the part, some people actually do get them to illustrate their life story and some probably get them just because it’s against the rules to get them done,” Grote said. “Not too different from in the world.

” But unlike those on the outside, prisoners must go to great—and often ingenious—lengths to get tattoos, using broken spoons and deodorant labels to create the foundation for tattoo machines and burnt ash for ink. Body artists and the people who manufacture tattoo machines are highly respected by other inmates, but they are viewed warily by guards and corrections officials who say tattoos carry health risks.

Eric Glisson, 43, spent 17 years in Sing Sing making tattoo machines for extra money. The state paid Glisson about $6. 50 every other week for various prison jobs. A tattoo machine, he said, sold for considerably more and could be made in a day. “I could crank out about three machines a week, maybe one every other day, and charge $30 each,” he said.

Prisoners take apart beard trimmers or CD players to get at the tiny motor, which they can adapt to make the tattoo needle go up and down quickly enough. (Tattoo artists who use beard trimmers can quickly put the shaver back on and trick guards searching for contraband.

One former prisoner who now runs a tattoo shop said he used to make black ink by trapping soot in a milk carton placed over a burning pile of plastic razors or Bible pages. He would mix the leftover ash and soot with a bit of alcohol (for hygienic purposes).

To get color, some inmates use liquid India ink that family members buy from arts and crafts stores. An example of the kind of rudimentary tattoo rig used by prisoners, assembled with tape, a pen, a lighter, scissors, a battery, a motor, a guitar string and paper clips.

A guitar string slides through the body of a pen to become a needle. Paper clips form a platform for the motor. A lighter heats up paper clips to fuse them to the plastic motor body. The guitar string connects to the motor, and excess wire can be snipped. Wires from the motor attach to each end of a battery.

Corrections officials say shared needles can spread blood-borne diseases, such as HIV and Hepatitis C. It’s not an unfounded concern: In interviews, former inmates said it was common to see multiple people tattooed with the same needle. In 2005, a Centers for Disease Control report examined 88 males in Georgia’s prisons and found that half the men had contracted HIV from getting tattooed while incarcerated.

Next to other contraband that prison guards have to look out for, such as drugs or handmade guns crafted from aerosol cans, cracking down on tattoo machines isn’t a high priority, he said. “It’s kind of like, pick your poison,” he said. Department of Corrections officials in New York wouldn’t discuss how people are disciplined if they are caught with tattoo machines, but said that “disciplinary sanctions” could happen. Khalid King tattooed his right arm with the name of his ex-girlfriend, Veronica, who said she would stick by his side while he was locked up. Aileen Son for The Marshall Project The tattoo on King’s left arm shows a hand holding a crystal ball saying “Shadow Bred,” because during his time in prison, he wanted to be in the shadows and not draw attention to himself. Aileen Son for The Marshall Project Still, inmates often believe that tattoos are worth the risk.

“The prohibition on tattooing exists to preserve the health of incarcerated individuals and staff, as well as the security of the facility,” said Dee Johnson, assistant public information officer for the New York Department of Corrections, in a statement.

Khalid King, 38, who served 11 years for a robbery and got five tattoos while incarcerated, described how he would play a kind of duck-and-run game with prison guards to avoid being caught with fresh tattoos. He’d stop going for food in the cafeteria for days and would even avoid the showers for about a week, he said.

“It’s not like I could get her, like, something from the commissary,” he said. A tattoo was the only gift King could think of. So, he got his first tattoo—Veronica, his girlfriend’s name—done with a dressmaker pin. The girlfriend is long gone, he said, but the significance of the tattoo stays with him.

What is prison tattoo ink made of?

Process [ edit ] – Since tattooing in prison is illegal in the United States, the inmates do not have the proper equipment necessary for the practice. Inmates find ways to create their own tattooing devices out of their belongings and found materials.

Improvised tattooing equipment has been assembled from materials such as mechanical pencils, magnets, radio transistors, staples, paper clips, or guitar strings. [1] [ better source needed ] In addition to the tattooing equipment, the ink utilized also needs to be improvised—potentially consisting of ink taken from pens, melted plastic, soot mixed with shampoo, and melted Styrofoam.

What can I use as a tattoo needle?

Stick and Poke Tattoo Needles – The most common  stick and poke  tattoo technique, commonly called the ” needle and thread tattoo technique ” consists in inserting a sewing needle right between a pencil’s eraser and the metal socket. The dental floss is then rolled around the needle to create an ink container. 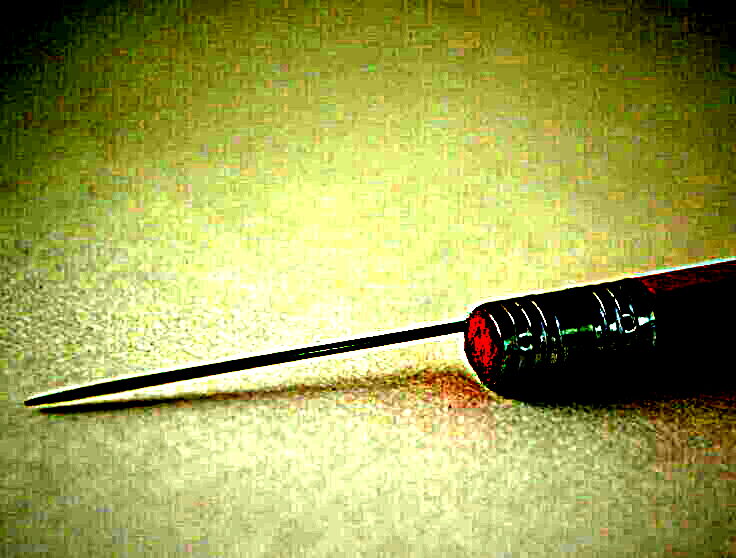 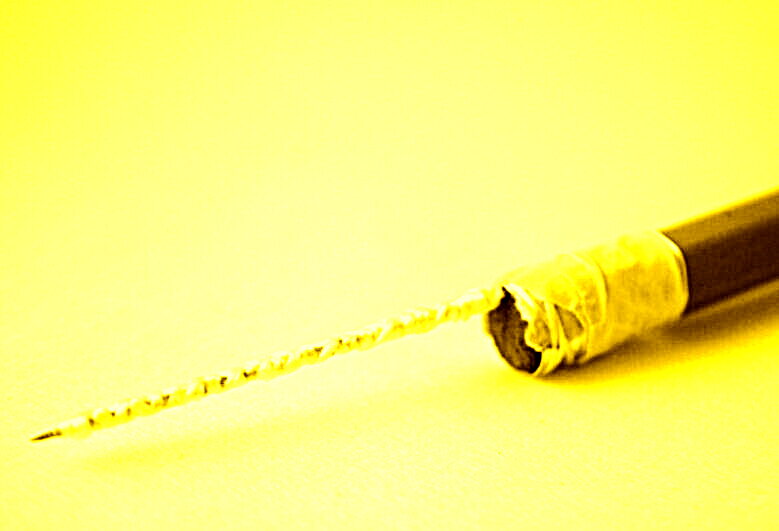 With a careful use of dental floss and proper needle sharpening, you can get away with tattooing using sewing needles. However, these tools aren’t optimal for stick and poke tattoos since they don’t retain ink as well as tattoo needles and aren’t as sharp. Moreover, they are imprecise and less hygienic. In my experience, the simplest and most enjoyable way to proceed is to use stick and poke  tattoo needles.

Is a Bic Pen Toxic? – The package itself usually tells you it’s non-toxic. So you’re safe. A Bic pen is a regular ballpoint pen, so if you’ve read everything above, you already know you’re good! Personally, I like to use Bic pens the most, I really like their feeling and there’s a lot of colors to choose from. 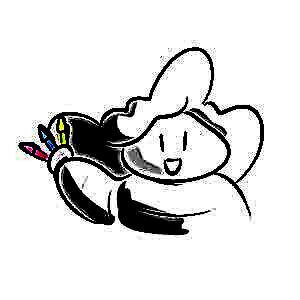 Also, from experience , I never had problems with extra ink spilling from my pen. From all the Bic pens I’ve bought, it has probably happened once or twice. Another advantage is that they’re quite cheap and can come in big packages if you wish to get a lot of them at once and save them for whenever you need them!.

By Lorry Schoenly Is tattooing a part of the inmate culture in your prison or jail? If so, your population and staff may be at risk for more than just bad artwork. Homemade prison tattooing can have serious health risks due to bloodborne pathogen (BBP) transmission.

However, inmates are far more likely to contract Hepatitis C during tattooing, as more inmates have this condition. Although infection rates vary across prison systems, between 30 and 40 percent of the United States inmate population is thought to be carrying the Hepatitis C virus.

Only about two percent of the general population carries HIV. Hepatitis C is significantly more contagious than HIV and, if left untreated, it can result in significant liver damage and death. And unlike Hepatitis B, Hepatitis C currently has no available vaccine.

Reining in underground tattooing can reduce the spread of Hepatitis (in all its forms) and HIV among the inmate population at your facility. When you reduce makeshift tattooing in your prison population, chances for viral transmission to custody staff and the general public also decrease.

Here are several suggestions for reducing this practice: • Include education about the dangers of prison tattooing in the inmate orientation process of your facility • Have healthcare staff regularly provide additional education during sick call or health rounds, should fresh tattooing be suspected • Have a zero-tolerance policy on homemade tattooing — create structured ways to deal with offenses and consider how initiation of a tattoo-reduction program will impact the prison subculture, including gang activity • Carefully handle tattooing equipment and needles when found during a shakedown — consider all items, even if appearing clean, to be contaminated Some prisons systems have implemented pilot programs to reduce underground tattooing in their facility through regulated in-facility tattoo parlors, a controversial practice akin to in-prison condom distribution.

These programs ensure that proper hygiene is maintained and sterilized equipment is used in the tattooing process, but at what cost? Are the benefits of sanctioned tattooing (decreases in BBP transmission and the trade in contraband tattoo equipment) outweighed by the costs (perpetuation of tattoo and gang culture)? Tell us your thoughts in the comments section.

Can you tattoo with Sharpie ink?

Sharpie Ink – Sharpies are great. They’re the go-to, top of the line choice for permanent markers. Since the markers are permanent, then they should make an excellent choice for stick and poke tattoos, right? Wrong. Any marker labeled as ACMI “non-toxic” by Sharpie has been tested and deemed to be safe for art, but this does not include body art or using the ink for tattoos.

Harmful ingredients found in various sharpie markers include n-butanol, diacetone alcohol, and cresol, all of which have the potential to cause health effects such as eye, nose, and throat irritation. King size Sharpies, Magnum Sharpies, and Touch-Up Sharpies contain xylene.

Xylene is a chemical capable of damaging your respiratory, cardiovascular, nervous, and renal systems. Many of these risks come from inhaling the vapors, though all bets are off once xylene enters your bloodstream directly, which is plausible if the needle goes too deep during an amateur hand-poked tattoo.

Even if you can avoid going too deep with a stick and poke tattoo, you still need to extract the ink from the Sharpie, and you could be exposed to harmful fumes while doing this.

How are stick and poke tattoos done?

What Are Stick-and-Poke Tattoos? – Stick-and-poke tattoos are a form of non-electric tattooing—that is to say, there’s no tattoo machine used. Instead, ink is applied to the skin by hand by attaching a needle to a rod-like contraption, much like a pencil and thread (professionals use a tattoo-grade needle) to create an analog tattoo machine.

The modern stick-and poke-movement, however, is attributed to the skate and punk subculture of the 1970s, where using sewing needles and India ink to DIY a tattoo was popular.

What Does A Snake Tattoo Mean On A Woman?

How Old Do You Gotta Be To Get A Tattoo?