What Does A Feather Tattoo Mean? 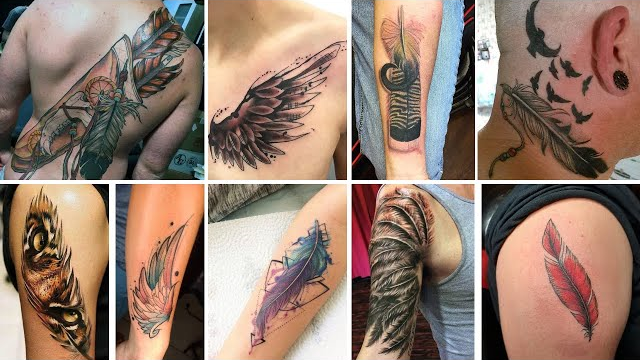 What does a feather tattoo mean spiritually?

Since there are as many different types of feathers as there are birds, the meanings behind feather tattoos can change depending on the wearer’s intention. In general, feather tattoos are representative of a bird’s ability to fly, and hence they symbolize the freedom that feathered wings provide.

Birds and their respective feathers were used throughout history in some of the world’s oldest cultures, but continue to be important to cultures around the world today.

Are all feather tattoos the same?

Tattoo is a highly personal way to express yourself. People get feather tattoos for all kinds of reasons, and the meanings behind them all have significance to each person. They can be a work of art, an important symbol, or a tribute to someone special. One of the most common types of tattoos is the feather tattoo.

Feathers, like the birds they come from, are a spectacular symbol of freedom and beauty. They’re found in all shapes, sizes, and colors. No two feathers are alike, just as no two tattoos are alike. What is the meaning behind feather tattoos? If you’re thinking of getting one yourself, you might want to learn more about the history and significance behind these feathers.

Keep reading on for a full guide to feather tattoos. You might be surprised to learn that many tattoos are more than just a work of art. They’re also part of a rich history of culture and tradition, evolving and growing over time. Tattoos might feel like a modern practice, but this is actually something humans have done for centuries.

One of the most important symbols for many cultures throughout the world is the feather. In ancient Egypt , feathers were a way to represent gods and goddesses. They were seen as a sign from above. This is similar to Native American traditions where feathers were a gift from the sky, given mostly to the best warriors.

In ancient Celtic times , feathers were believed to have mystical powers. Feathers supposedly held the power to take people to different planes of existence, such as the spirit world. They were considered to be medicinal, and they were given as a sign of good luck.

They are commonly found in Celtic tattoos , as wel. Today, feathers still have a huge historical significance. They’re an image many Native American cultures still display with pride, especially in their tattoos , and their meaning has only grown throughout time.

Each feather tells its own unique history, and they’ve earned their place in the hearts of many cultures, as you can check here in the phoenix bird feather symbology. This makes them a popular choice for tattoos. Feather tattoos have a rich history, but they also have a profound symbolism.

To understand where this meaning comes from, take a look at birds. These creatures aren’t confined to the ground. They’re high-flying and free. Feather tattoos are a sign of this freedom. It’s a way to show that you’re spreading your own wings and taking flight.

Birds don’t fear being high off the ground. They go boldly into the sky. Feathers capture this excitement and free spirit nature, the same as the cherry blossom tattoos , for example. In many different customs around the globe, feathers are a sign of connection to culture.

What does it mean when you get a tattoo of birds?

Feather tattoo with birds – Highly popular in the last couple of years or so, this design involves a large feather with disproportionately small birds appearing to fly out of the feather – as if they’re tiny parts of the feather, breaking off as they take flight.

All birds have feathers – hence the feather is the unifying space for the birds in the tattoo – but they’re all flying in their own direction. This seemingly contradictory set of ideas can represent the notion that although in some ways we are all the same – essentially equal and made of the same stuff – we’re unique individuals with our own paths. Another meaning sometimes ascribed to this design is that of letting go of our past or our origins, accepting changes, and not allowing our past to dictate our present. The design carries connotations of breaking away from what confines us into who we are and forging our own way and our own identity. .

What do peacock feather tattoos mean?

Meanings of different kinds of feathers – A feather tattoo can gain another layer of meaning though the use of the feather of a specific bird. Birds have always fascinated humans, and as such have earned an astonishing amount of symbolic and cultural associations, different for every major species.

What Does Three Dots Mean Tattoo?

What Is The Best Tattoo Numbing Cream?